The day finally arrived when we reached Bangalore Airport at about 11:00 PM in late night for the flight at 1:30 AM on the 8th of September. This was a special night considering that we were kicking off our 5th year anniversary in a very memorable way. 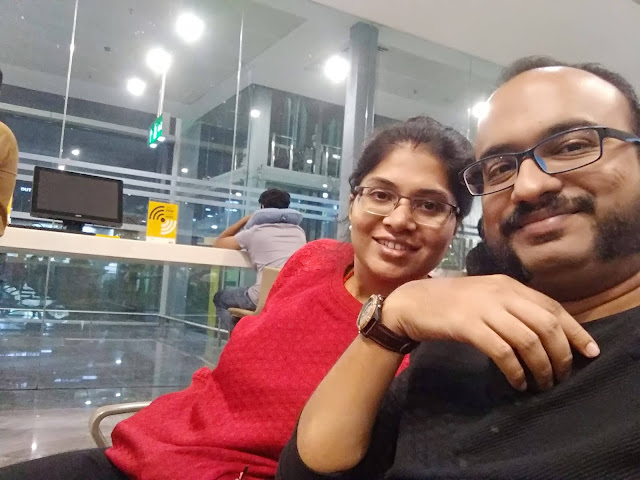 A quick celebratory selfie at 00:00 and the boarding started soon enough.
The flight was a Malaysian Airlines to Amsterdam and in the quintessential anniversary celebration, we downed the fine wine that came along with the dinner and relaxed into the long flight after practicing the phonetic names of the places we were about to visit. Rey-kya-vik, not Rek-ya-vik we blabbered.

Just before the flight landed in Amsterdam, we were appreciating the view from above - the city was really well designed - the careful juxtaposition of the waterways and the roadways was a sight to behold. Lots of green and blue with a good sprinkling of colourful houses and spotless white wind turbines was very poetry like. 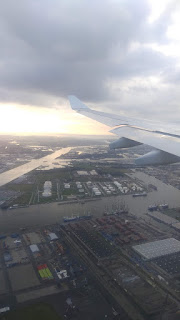 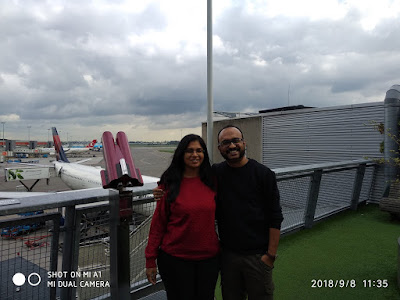 Amsterdam airport was huge - and lots of walking - and this was the entry point to Europe - the continent we were setting foot on for the first time. We had a couple of hours to kill and we had this major goal in mind - to exchange some of our Euro currency into Icelandic currency - and we found one of the Banks which advertised the currency exchange. After a brief wait in the queue, we exchanged some of our Euros into Icelandic currency - only to realise later that the exchange was at a terrible rate - it dawned on us later that when currency A is exchanged for B, you get the best value when A is not the common currency - essentially do not give Euro for any currency in a place where there is already lot of Euro - we should have exchanged Euro in Iceland and not in Amsterdam.

This was also the time to ensure the new credit card that we signed up for actually worked outside India - so a quick testing of the contactless feature to buy some sandwich and coffee gave us a lot of relief apart from filling our tummies. Found out that Holland and Netherlands are pretty much the same after studying some memorabilia in the airport. While walking around the airport aimlessly, we visited an open garden - and that is where we got the first sense of the chill in the wind ! Soon it was time to catch the next flight - Anniversary was still on !

The next flight was Iceland Air and KEF was just 2 hours away now. We were hoping to see amazing landscapes before landing at KEF, but realised later that KEF was right at the shore - so, ocean ocean all along and suddenly the flight lands in KEF. It was 3:10 PM.

We held our hands and congratulated each other on successfully landing in the land of our dreams - Iceland was finally here, well, Iceland was where it was always, we were here now ! and that too on our Anniversary. It was super windy and raining and cold and ultra gloomy, but hey, it was Iceland ! 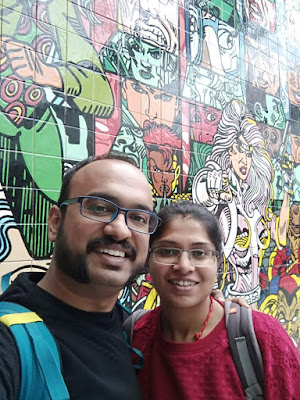 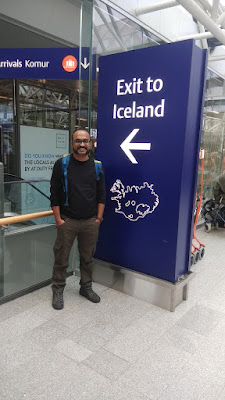 We quickly used the Airport free WiFi to call back home to let them know we were still alive and kicking. Then back to planning - two SIMs, finish the formalities and pick up the rental car, settle down in the car and get set. We'd pre-booked the rental car (Hertz) - and on the advice of several blogs also picked up the GPS and WiFi in the car. The two SIMs for each of our phones was very interesting - the prepaid pack was (a) shit costly and (b) had only like 2 GB limit ! I couldn't help but think of how dirt cheap internet is so important to a country - in India we hardly have such limits and it costs next to nothing. Anyway we went to the parking section of the Airport and loaded the KIA - this was two things different - (a) Left-hand-drive and (b) Automatic - so we quickly took multiple rounds within the Airport to comfort ourselves. The one thing that was really troublesome for us was the rear-view window - somehow the muscular memory could ever look on the right side to view the rear-view ! But you get adjusted to the situation much faster than you expect when there's an adrenaline rush.

Our AirBnB at Reykjanesbaer was a quick 10 minute drive from the Airport, in Keflavik - we had chosen this place in order not to drive around a lot on the very first day considering the jet-lag and adjusting to the opposite driving direction. 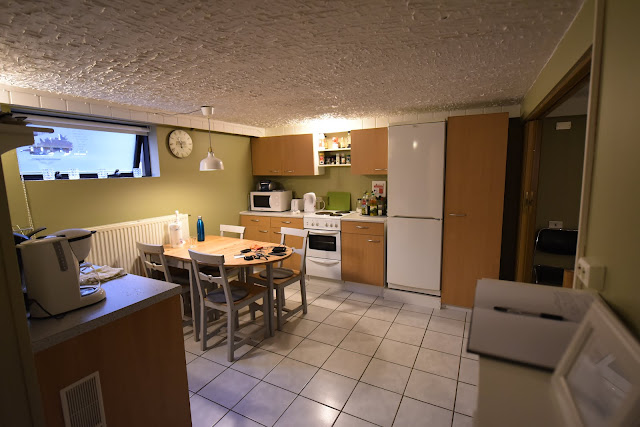 Gulli (Guðlaugur) was the name of our host and going by the zesty name, we were expecting a fun loving cheerful young lady who turned out to be a really warm 6.5 foot gentleman in his late 70s. Our room / cabin was the basement and it was arranged so well - and was so warm. In most hotels in India, on the towel, there's a small Hamam or Mysore Sandal Soap placed on it - but here in Iceland, the very similar looking bar on top of the fresh towel was not a soap but yummy white Chocolate ! :) 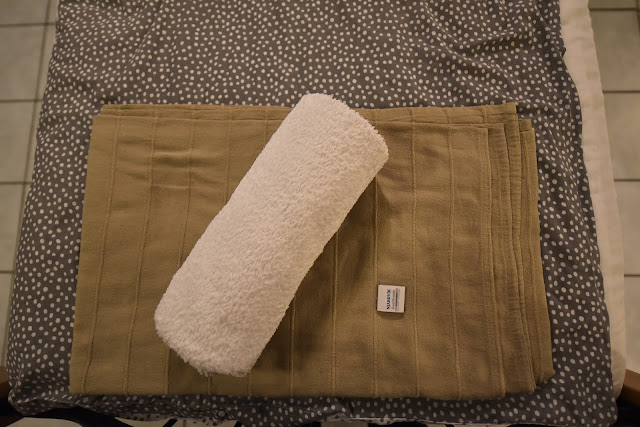 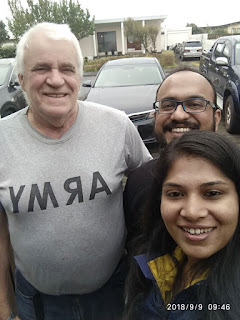 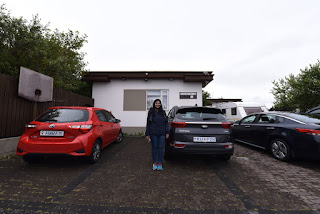 Upon noticing the washing machine in the corner, we immediately proceeded to wash our travel wear - but there was only one problem ! The machine had all modes and measurements in German !

Google Translate quickly helped us understand the various modes and the clothes were getting washed. We wanted to quickly pack and plan for the next day and decided to go to the super market to get some staples. We drove around the small town which was by now practically empty - we visited Netto and bought some eggs, vegetables and a slice of brown bread. 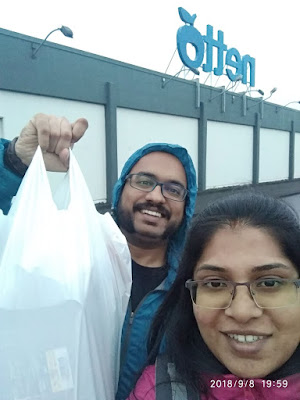 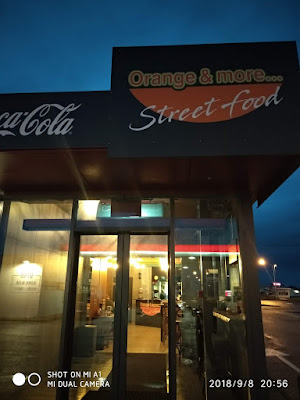 By now, we had decided that our longest Anniversary was to be celebrated outside - so we searched around for places to dine - while most places were closed by 6:00 PM, there was this one quaint little cafe which was open. We ordered a hot-chocolate and a vegetarian dish called Hekla ! 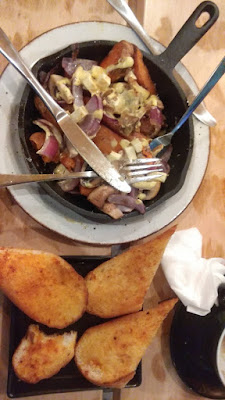 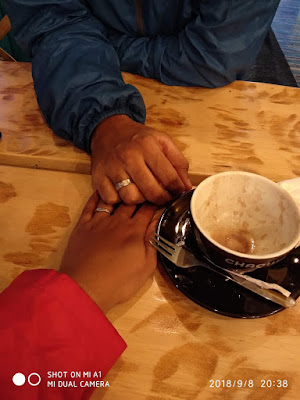 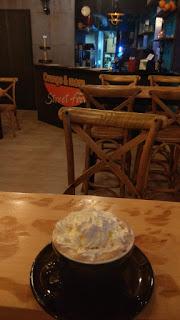 Hekla was this wonderful combination of sweet-potatoes, mushrooms, tofu and veggies in a brown sauce - it was the perfect way to end our longest anniversary of 24 + 5.5 hours.

We headed back to the BnB after the sumptuous dinner and again used Translate to open the german washing machine. Quickly repacked clothes and planned to leave early next day at 7:30 AM. The jet-lag exhaustion, the warm meal and the warm BnB helped calm the adrenaline and we were in deep sleep within minutes. 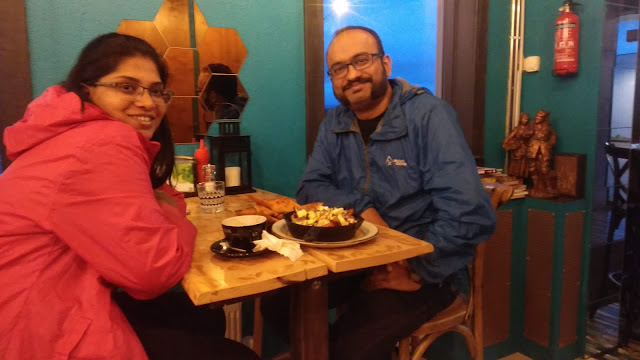 You there, this is really good post here. Thanks for taking the time to post such valuable information. Quality content is what always gets the visitors coming. Beauty Salons

We are leading online platform providing services of packers and movers in all the major State of UAE . We are committed to provide you best cargo service of best cargo company of your city so that you can turn the relocation process into easygoing and smooth affair. We have our associates in almost all the major cities and towns with aim to help you at your door step with high quality packing, moving, loading, unloading, unpacking and rearranging services.
Pakistan Cargo