Day 6 was a relaxed one. We had decided the previous night to take a good sleep and leave for Khardung La since it is just 39 kms from Leh. It will take around 1-2 hours to reach there if one maintains a normal pace. We woke up by 8:00 AM,  had tea in Saveen’s room and again discussed a bit about the adventure trip to Tso Moriri. We were ready by 9:00 AM and left for Khardung La. We decided to have breakfast at a German Bakery near Apex Adventures. They had a good breakfast menu. Surprisingly the English breakfast as well as the Indian breakfast, both tasted good. Khardung La is towards the north of Leh. One has to cross Khardung La to go to Nubra Valley and Hunder. We couldn’t go to Nubra Valley and Hunder because of the unpredictable weather and lack of time. It was not possible to go and come back on one day.

The guys bought gum boots for themselves as we would be encountering many water crossings on our way to Kahrdung La. Khardung La, (La means pass) is situated at a height of 18,380 ft as mentioned there and also considered as the highest motorable road in the world. But those who have travelled to other places claim that there are passes at a greater height than Khardung La which are motorable. So, Kahrdung La is actually at a height of 17,582 ft which is not the highest but one of the highest motorable roads in the world.

For more information on these do check these links. They have useful information about the highest motorable roads in the world.

Marsimek-La - The Highest Motorable Pass in the World 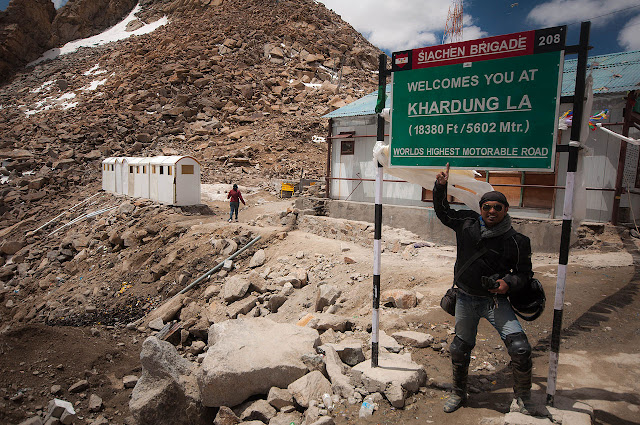 The drive to Kahrdung La is short yet difficult because the roads are narrow. The roads are not well paved despite being maintained by BRO and one can find water crossings everywhere because when it is past 10:00 AM, the sun is up and the snow starts melting. Narrow streams come down that form water crossings. These water crossings can be extremely dangerous at times. Bikes can get stuck and one can also fall while riding. It is scary because to our left there is an open valley and to the right high rocky mountain range which can cause landslides anytime. The army works continuously in helping the travellers move to and fro from either side by clearing up blocked roads every now and then.

The initial few kilometres are really comfortable to ride, for the rider as well as the pillion. But once the uneven roads start it gets really difficult. The scenic beauty around is worth mentioning as we are slowly moving up towards a higher altitude but the path gets risky also. There are stones fallen on the road, freezing cold water flowing and the ride is a bumpy one, so terrible at times that one can feel the bladder bursting with every jerk of the bike. It is a short journey but a biker needs courage to go through this terrain more so with a pillion behind. The enthusiasm with which Yd, Viren and Saveen rode till Khardung La is worth mentioning.

When I have asked Yd how much does he love me, at times his answer used to be, ‘As high as the mountains of Ladakh.’ I never believed in this comparison. I had to see those majestic mountains in order to believe this. As we kept going up I realized how majestic the mountains around were.

We were moving closer to the snow-capped mountains again. It was getting colder as we moved up. There were many travellers, mainly bikers and cyclists who were going along with us with their spirits and energy high. The first halt was at South Pullu where we needed to take a break. As we were ascending we were bound to have symptoms of altitude sickness but we had to be prepared for it. We kept ourselves hydrated but the disadvantage of this was that we had to frequently empty our bladder. With no toilets around except at South Pullu, we had to be dependent on the boulders and rocks again.  I had a terrible time while going up. There were multiple water crossings where Yd asked me to get down and walk up till it was clear for him to drive with me sitting behind. That 5 minute walk seemed like running a kilometer up the hill. I grew breathless at times and was also finding it difficult to breathe. My face was covered well with a scarf but the altitude was having its effect on me. I wasn’t feeling sick but was also not comfortable carrying the back pack and bearing the bumpy ride.

One more mistake that we did- As pillion riders, we did not take gum boots. It is essential because at times there is no room for walking on a dry area. The stones are submerged deep in water and our shoes are bound to get wet if we have to walk across. My shoes were wet throughout the journey but I did not catch a cold despite all that. 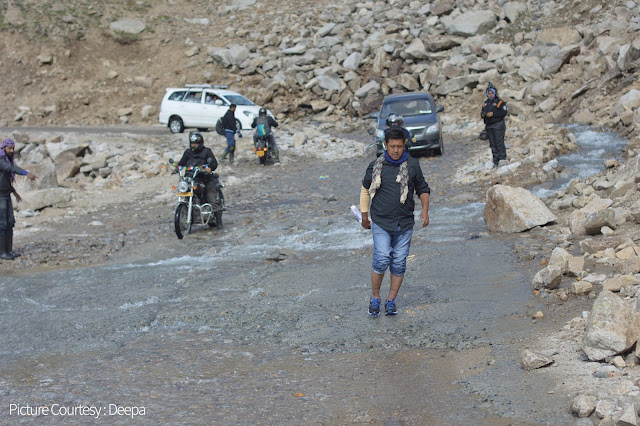 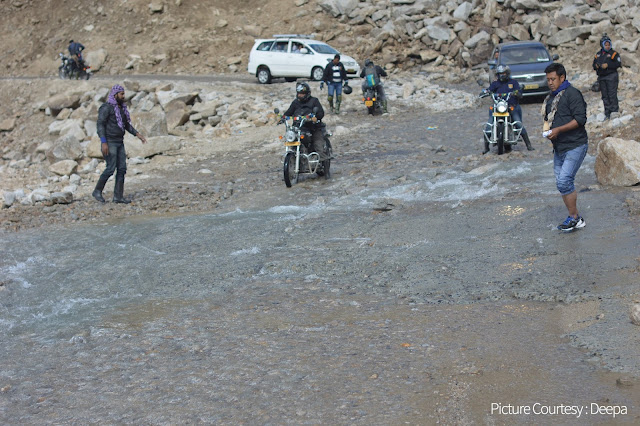 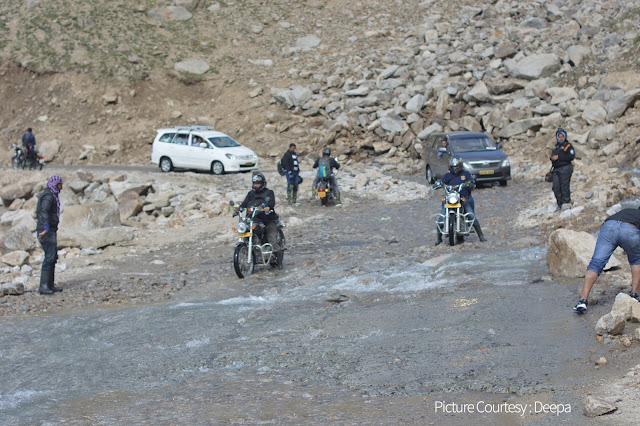 There was one large water crossing where the other two bikes went ahead but I suggested Yd to stop so that I could get down and walk. Yd slowly crossed the large water crossing but I was stuck midway. I couldn’t walk through as the water was deep. It was extremely cold and it could wet my jeans. Yd suggested me not to move. I hopped - skipped – jumped around form one stone to the other unable to find a way to cross without getting my feet in the water. Many bikes had stopped exactly at that point. Saveen sent his gum boots through Viren and Yd brought them for me. We crossed that difficult part holding each other’s hands as carefully as we walked while taking our vows around the sacred pyre during our marriage. He brought me safely to the other side. I was not scared but gasping for breath. Perhaps the cold was irritating me. I felt normal only after taking a few sips of water. While continuing on our journey again, I asked Yd for the first time in our entire Ladakh trip, ‘Why did you bring me here Yd? I feel terrible.’ He did not answer my question but I knew he brought me here despite all these difficulties just to show me one of the highest passes in the world where one could reach on a motorbike. He wanted to show me all those places which he had visited. He wanted me to feel the magic of the place. I felt normal only after reaching Khardung La.

There were multiple Buddhist prayer flags hanging around the sign board. Snow was still intact on the mountain. There were many tourists waiting to take pictures with this sign board. The army station there with a souvenir and a snack shop was playing Bhangra music. You will feel like dancing listening to it after having accomplished the ride successfully. 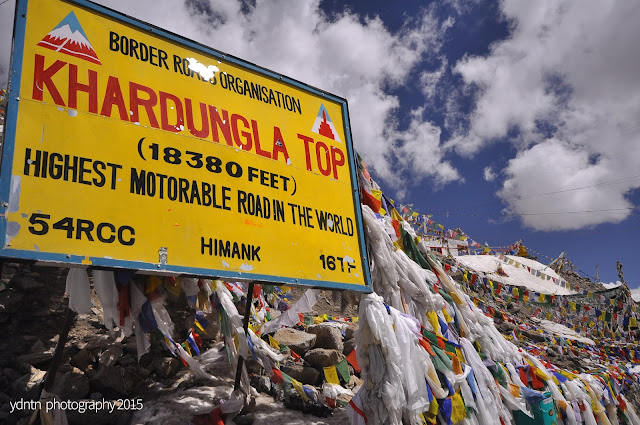 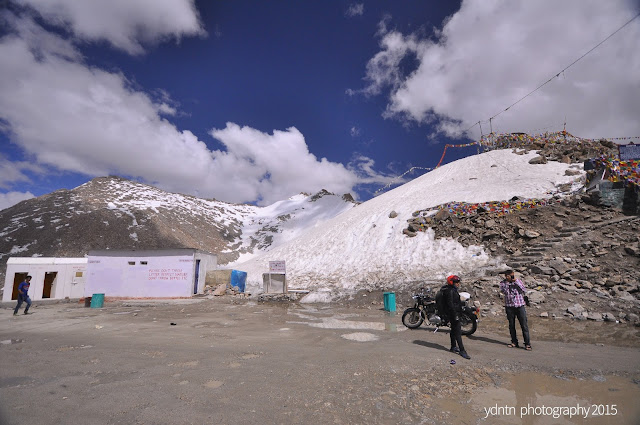 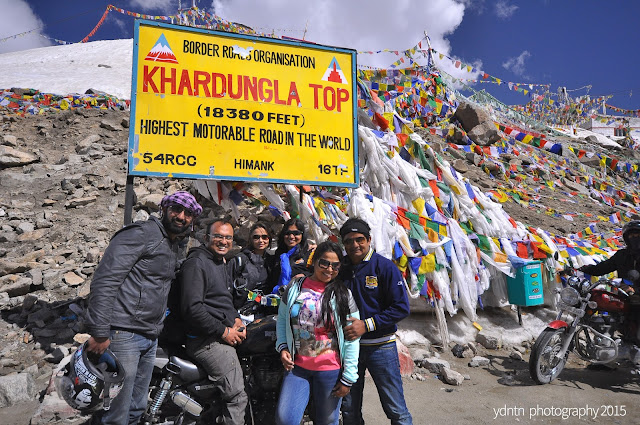 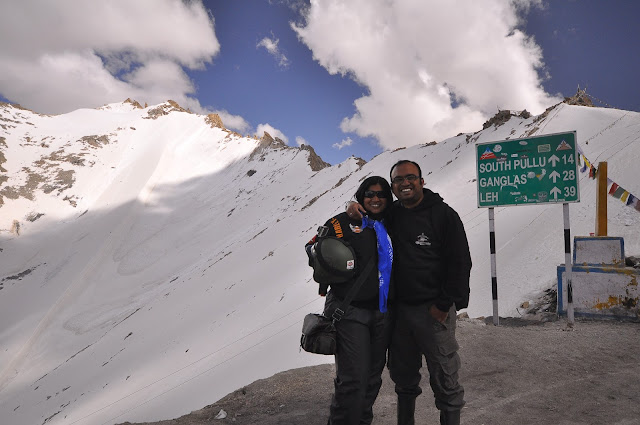 It is advised not to stay in Khardung La for more than 15 minutes as it could cause dizziness and increase symptoms of altitude sickness. It is true. We were able to feel the discomfort within 20 minutes. It was half an hour by the time we clicked pictures and packed off to leave.

If one goes down hill from the pass they enter Nubra Valley and later reach Hunder which is famous for it Bactrian camels and Diskit Gompa/ Monastery. Nubra Valley is a very picturesque location but we couldn't cover this region. 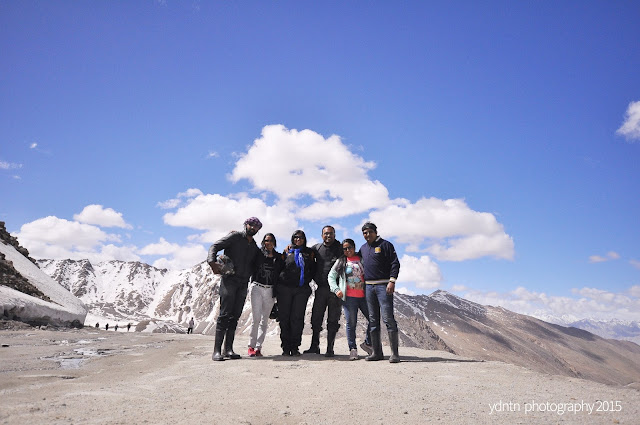 The journey to Leh from Khardung La was the same but we managed to pull it off. The large water crossing was a problem but each pillion rider was given a lift on an Innova. The tourists were very helpful. Had we pillion riders, also worn gum boots, crossing it would have been fun.

We halted at South Pullu again for a break. We were going down the slope towards Leh when Viren’s bike gave a little trouble. He was not able to start the bike. Yd and Saveen helped him move and set the bike rolling. We were going down the slope so the mechanic from Apex suggested that letting the bike move along the slope down would easily bring us to the bike shop. He allowed gravity to move his bike. Viren reached till the mechanic’s shop in the same way. Not a single moment did we have to push the bike after he started. We followed him all along.  It was 4:00 PM by then.

We girls went to a French bakery opposite the mechanic shop and ordered tea, coffee and snacks. The guys got the bike checked and went to the hotel to put back the things. They came to the café to join us for coffee and tea. We girls were in a mood to shop that evening because we would not get free time again. We three went to a small shop to buy harem pants and bag. Deepa found her Gujju connection yet again. She bargained well with the shopkeepers as he was also from Baroda. After having snacks we split ourselves in Leh market to do our bit of shopping. Shopping was fun. Deepa and Saveen were to join us but they lost track of the direction Yd and I were heading in. We were all by ourselves then quickly shopping for everything that we wanted to take. I finally found a traditional Tibetian diary in the local market after a lot of search. It is my most precious souvenir from the Ladakh trip.The local Tibetian market had an amazing collection of beaded jewellery. If given a chance I would have purchased beaded jewellery of each colour. As always, Yd made me select the best one and I had to leave the others. We were done with shopping in two hours. We had to reach our hotel before it started raining.

On reached the hotel we got a call from Spiti. She said that while shopping she had left her mobile phone in a shop and thankfully had also got it back. That night’s dinner was in the hotel while it rained heavily. The next day’s trip to Pangong Tso was going to be in the Innova as the route was around 150 kms from Leh. Since all the three bikes had had some or the other problems none of us were in a position to take a risk like Tso Moriri. We all wanted to relax, especially the riders. Yd was looking forward for the Pangong Tso trip as he was not able to visit this in 2012.  Our accommodation had been booked by Dawa in Camp Red Start in Pangong Tso.