Biking in a cold desert

There are few themes that are always on a writer's mind but sometimes these refuse to come in the form of writing when we want. There are situations that suddenly force those hidden thoughts out and then the outcome is in the form of an incredible story.

I am going to narrate one such story, of my husband (Yd) who had a wonderful experience. He narrated to me this experience, which he calls as the landmark event in his life. It made him rise above his fears.  The moment I read on Indiblogger about the campaign on "Rise above fear!" promoted by https://www.facebook.com/mountaindewindia , I wanted to write about his most memorable experience.

The plans of my road trip to Ladakh which is the mecca for bikers started about an year ago. Finally after a lot of background preparations, We- A group of Royal Enfield bikers decided to go on a road trip to Ladakh. The dates were fixed from mid of June 2012 to early week of July 2012.


We reached by train from Bangalore to Delhi . Our bikes were transported to Delhi. From Delhi our actual ride would start.

Preparation of  the trip had started. I wanted to start preparing three months before and wanted to get started with my bike. I had to purchase all the necessary gears.

One of those days, I went to a buy a tire/tyre - ironically not a tire for my bike but a tire like ring cushion to sit on. I was diagnosed with coccyx bone injury just weeks before my dream Ladakh Road trip. (One day at office I fell down while playing TT and unknowingly my tail bone(coccyx) got injured and I had ignored it initially)

All my dreams were shattered,"Will I be able to do it?" I couldn't sit continuously for more than five minutes on any goddamn surface including soft cushions - the only thing I could sit on was that tire.

After consulting with multiple specialists(who expressed no hope of recovery in anything less than two years), I finally went to my family doctor; and she strongly advised me not to go on a bike trip which was about 3400 kms on crazy terrain. In fact she told me that I should stop riding my bike for about an year. That was earth-shattering for me to hear - I was really hoping to recover in a month and get back on the bike. I explained to her about my passion towards riding a bike and also about my dream trip. She was still not convinced.

"At this age coccyx injury? You have got a life to live. I won't allow you to go on this bike ride," she said angrily. I convinced her somehow and she decided to put me on the strongest pain killers for the duration of 3 weeks. I knew the consequences but decided to take my chances - My marriage was a about an year away and everybody including my girlfriend's family(now my in-laws) were very worried about me.

Hence after an entire month of convincing my family members I decided that I have to go for this trip no matter what!

We arrived in Delhi, and found our bikes waiting there at the blue-dart godown - after quickly assembling the mirrors, loading the bike with all the luggage and filling up our petrol tanks, we headed to Chandigarh - I'd not taken the Pain Killer just to gauge how bad the injury really was - but quickly had to take it on reaching Chandigarh - In addition to the Pain-Killer, I also was advised to take another antacid to counter the effect of it - In addition to this, plan was to take another altitude-sickness tablet every single day when we start riding on the hills.

From Chandigarh, we marched on to Manali, spent a day there - I was enjoying every bit of it - then on to Keylong, spent a day there before the craziness of the legendary Manali - Leh highway started. By now I'd made it a habit to pop those pills early in the morning because under no circumstances I wanted to screw this trip. The biking was strenuous and tiring as much as it was amazing. Crazy roads, crazy waterfalls in the middle of ridges (caused by the melting ice) were dangerously fun. I realized, I made the right choice - So what if I had this pain?? I'd at least be contented with what I'd done in my life. After Keylong, there were Gata loops and some of the most remote and desolate places I'd ever seen - no mobile network, no petrol, no trees, no people for about a hundred kilometers. It gets you to see into your soul.

After crossing the HP border, we entered J&K and it became a little more remote - stayed up in high-altitude Pang before making our way to the Morrey Plains - Driving through sand took the craziness to a different level. Then came some of the most beautiful villages I'd ever seen in my life and the Buddhism angle kicks in before viewing the first glimpse of the legendary Indus river - the river that gave life to the Indus Valley Civilization - some of the oldest and advanced civilizations in history.

That valley opens up to the Ladakh area and Leh was now only a few kilometers away. I was beaming all through this route that was filled up with heavy Army presence (China's close-by). After reaching the hotel (that surprisingly had a Ladhaki man speaking Kannada).We rested our body and souls for a day before heading to the highest motorable road in the whole world - Khardung-La - at a crazy height of 18380 feet, it was dauntingly high. But the kick that I got there was unbelievable. 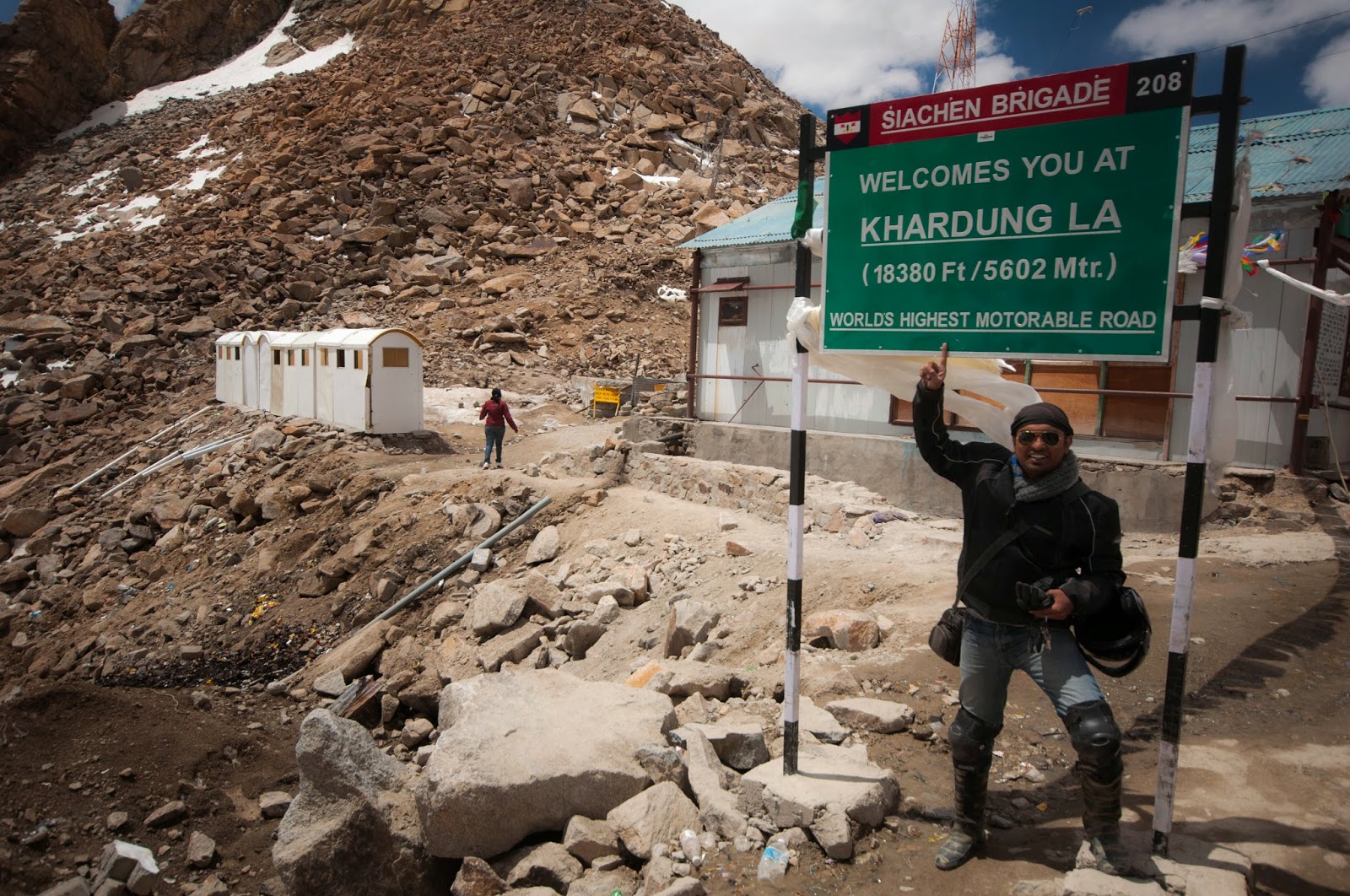 After conquering the highest pass, we headed on to one of the more legendary valleys, Nubra - an exquisite valley on the bed of an ancient river - stayed there for a night and rode on camels (!) - the snow, the ice, the sand, the camels - my senses went hay-wire. From there we returned back to Leh before attempting the Tso-Moriri - another remote high-altitude lake. This two day trip was absolutely crazy and tested my endurance and hope to a large extent. From riding in the valley surrounded by high-altitude peaks on all sides, to going in paths which we were not sure of in the middle of the night - with absolutely no sign-boards or people or trees or any kind of light anywhere, this was absolutely crazy. We heaved a sense of relief on reaching the ITP checkpost in chilling weather before taking a tent in the village of Tso-Moriri. The lake in the morning was a pure beauty. Scintillating colors with beautiful clouds and hills were a treat to the eyes.

From Tso-Moriri, we headed back to Leh and from there we bid Leh goodbye and headed on to Kargil .The plan was to max the trip by going to the remote Zanskar Valley - a valley ridden by absolute bad roads for about 250 kilometers. This was my worst nightmare. I remembered my injury and thought about this journey probably a thousand times if I really wanted to do it - but then I finally decided to do it. The route was crazy, pathetic roads but amazing views - we crossed the 'drang-drung' glacier and some very high passes (Pang-La) before reaching Padum. This was also a time I'd lost connectivity with my family and they were very worried about my status. Padum was an old town with some old kingdoms and palaces - extremely remote. Next day we started back to Kargil (Leh to Zanskar road route does not exist, a trek exists though, called 'safed chadar' trek) . In Kargil, we felt deeply patriotic especially when we saw the sign on NH1 that read - "warning - you are under enemy observation" - felt even more patriotic after we visited the Kargil War museum and Dras sector. After Dras, came one of the craziest and most dangerous passes ever - the Zozi-La - breathtaking roads at crazy inclines that lead to Gulmarg, Kashmir. We travelled through Kashmir, reached Srinagar - by now the legendary views were almost complete and the road ahead was plain boring, so we stopped at Jammu and parceled our bikes from there - took a bus back to Delhi and took a flight from there to Bangalore.

The legendary trip was complete, but I still had a long way to go. Only after I reached Bangalore did I stop taking the pain-killers and then all that pain came back double-whammy. Physically I was crying (back to sitting on the tire) but mentally I was at peace, I was contented and it was worth it.
I had to leave biking for another year and few months before I got married and luckily all's well now The injury healed all by itself after an excruciating pain that lasted for an year and a half.

If you have experience to share just as it is shown in this video, please do, because we need to triumph over our fears someday. Kyunki..... Dar ke aage Jeet hai!!!

Very beautifully narrated through the eyes of the traveller. Wish we could also travel to Leh.

Both of you dare to dream and achieve too!