Mallamma and her kids create #ColgateMagicalStories

Yesterday as I was climbing up the stairs to reach my house I could hear someone crying. The sound  seemed to be coming from Mallamma's house.

Mallamma is my maid who stays in the ground floor of our apartment. Her family is more or less like the care taker of our building. They are a family of 6 including her husband and four children. The eldest son works as a construction worker with his father and the other three are school going children. All are boys and by now one can guess what nuisance they can create when they start playing together or even fighting. Oh!! By the way, we stay in Bangalore, Karnataka. Mallamma is a very common name here. The three young boys named Basavaraj, Jagadish and Veeresh go to a school which is run by a temple organization here. It is a Kannada medium school but these kids also are made to learn English as one of the subjects. Most of their conversation is in Kannada, the local language of Karnataka, but these kids are sharp enough to pick up English words and also talk. Among them , Jagadish talks more often in English and is very confident about his replies and words, despite  being grammatically incorrect. They fall in the 7-12 age group. All three are very sharp and witty kids. They love to read, write, draw and also paint. They play together, create lot of noise, keep coming to my house sometimes with their mother and also fight a lot.

There was no one around so I walked down and went to their house. I knocked the door and there came a crying Jagadish holding bits of paper scrap in his hand. Mallamma was obviously not around, otherwise she would have taken them to task by then. My heart melted seeing Jagadish crying so much. On being asked he told me that his eldest brother had thrown his toothpaste box into the dustbin. I wondered as to why would anyone cry for a toothpaste box? I was too tired to ask anything more. Considering that there was nothing major that had happened, I went home. While having my evening coffee I scrolled through the IndiBlogger page. To my surprise, there was this contest which was showing up first- 'The Power of constructive parenting' sponsored by Colgate and bloggers were asked to participate in it by sharing the magical stories called #ColgateMagicalStories. As I read through the contest details and looked at the video, I deciphered the reason why Jagadish was crying so much.

Without much ado, I hurried to the nearest option available for me. The medical shop that is opposite my house.  I bought all three packs of the Colgate toothpaste with Calci-Lock Protection, that would make the teeth strong and also have cavity protection. I rushed to their house with the toothpaste boxes and offered it to Jagadish. He had become quite dull by then. He smiled looking at them but did not say a word. By then, it was time for them to sleep. So I bade them good bye and told him to take the boxes from my house the next day morning. Within seconds, the youngest one, Veeresh responded, "I will also come with Jagadish". I laughed looking at them and left without saying a word. Had I mentioned anything more, they would have surely ended up fighting again.

I somehow wasn't able to wake up early today. I had totally forgotten about the toothpaste boxes that were lying on my table. I woke up with a start when I heard chattering noises coming from my drawing room. While rubbing my eyes, I walked into the room only to see Jagadish accompanied by Mallamma who had already come in for the morning duty (cleaning the utensils). He was already seated at the table and was admiring the toothpaste boxes. I brushed fast and scurried with my camera. He was not even aware that I was going to capture these moments which might be just 'out of the ordinary' moments for him. He was dressed neatly in his school uniform and had also had his breakfast. I asked Mallamma about this miracle that had happened today in the morning. On any normal day, Jagadish would never be up so early and also get ready to go to school. Mallamma told me that he had been up from 5:00 AM and was fidgeting in the bed telling that he wanted to get the toothpaste boxes from me and come to my house. I was totally surprised feeling embarrassed at myself for waking up late and also astonished at the fact that one small encouraging tone could make this little boy feel so hopeful. I could see the excitement and gleam in his eyes. He was totally engrossed in opening the box and taking out the tit-bits from it. Mallamma also joined him and encouraged him leaving her work. Though she didn't know what exactly to do, Jagadish managed to pick up words from the box and understand the instructions. He asked me for a cardboard box, which I promptly gave him as I found one by chance.

Mallamma, an illiterate daily-wage worker, is one such mother who falsifies the theory that the  uneducated lower class cannot teach their children. She herself is not educated but makes sure her kids have a good education. She ensures that they study daily and also involves herself in their day to day activities at home. Despite all the domestic help she does in different houses as an occupation, she never fails to drop and pick up her kids from school. She also sends them for tuition, because she is not educated. She is a very smart, encouraging mother, a Modern woman in the true sense. She follows the concept of constructive parenting in all ways.

Even this activity happened because she took interest and brought Jagadish home. She was standing and watching him do the creative work without having a clue as to what was written on the box. After Jagadish explained to her in Kannada she understood what was this whole exercise about. She started instructing him too in between, asking him to stick properly. She was learning with him. It was a very beautiful interactive session. Here the interaction was not based on words or conversations between the mother and son but was based on the mere presence and support which she offered for her son.

Jagadish was mid-way in finishing his work when his little brother Veeresh joined. He had just woken up and was amazed seeing his brother up and ready that early. He too started making something that he could from the left over cut outs. It was time for school by then and the kids left everything on the table, neatly arranged promising to come back in the evening.

They stood by their words. At 6:00 PM, post school and tuition they came home. They were 3 now. They finished up the exercise within fifteen minutes and completed the beautiful castle with the people in it. They knew exactly what to do. Creativity was just coming so naturally to them and I absolutely enjoyed filming the whole activity.

Mallamma also joined in later and was very satisfied seeing her kids happy and involved in something where they didn't fight.

Such is the power of constructive parenting, where one can be an active participant along with the children. This will encourage them to do better and also create a strong support system where they would be free to approach their parents for things as silly as building a castle. It is the best example of using a kids creativity to make something out of waste. 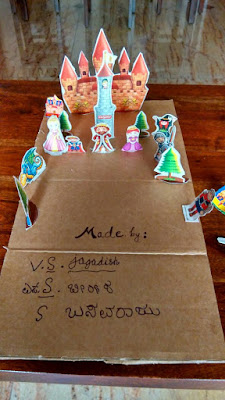 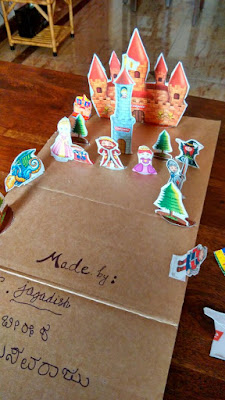 So, I am am representing Mallamma, who might not be able to blog about her feelings here but this interactive session can be an inspiration for everyone. Her way of involving with her kids and trying to help them out is one of the best examples of constructive parenting.


Thanks to Colgate for helping me create the #ColgateMagicalStories for these kids.

Do check out the video to see this creative activity by the kids.

Superb! Very creative and caring of you for having brought out the best of these gifted kids. Normally the talents of such children do not come to forefront unless people take special care of them.

Thanks amma. I am so glad I could make them happy!!!

lovely pictures u shared,thanks for sharing with us.