We have been glued to news channels and newspapers and have been supporting online organizations to protest against the release of the juvenile accused in the Nirbhaya case. We have somehow lost trust in the judicial system. From the day such incidents started coming into limelight not a single woman feels safe. I live in a free independent country, as a free independent married woman but I am still not free. I think 10 times before venturing out of my house if it is beyond 10 PM, considering that I stay in one of the most busy areas in Bangalore.  Despite all this, I am still not free to move around all by myself, even if I want to just grab an ice cream at midnight. I read the newspapers and feel more insecure. There is a question that lingers in my mind always... 'What If....?' I feel scared thinking beyond that.

Only 1% of women who face sexual violence and want to seek help end up reporting it to the police according to the National Family Health Survey, 2005-06.

Nearly two-thirds of women who have ever faced violence (physical and sexual) never seek help.

In cases of only sexual violence, only 15% have ever told anyone about their experience and only 8% of women ever seek help!

In all, 35% of women aged 15-49 in India have experienced physical or sexual violence.

This could happen only because of two reasons: Either women are too scared to report incidents of sexual violence or they do not know how to go about filing an FIR?

The#KnowYourRights initiative taken by Amnesty International is a much needed step to make women aware about their rights.

What is the need to report cases of Sexual violence? For those, who are not aware, Sexual violence does not only include rape or physical harm. It also includes incidents of sexual harassment, voyeurism and stalking. If women feel scared and do not report such cases, the police will not know. The moment we are quiet about it and scared to voice out our opinions, the culprits will feel triumphant. They will never get punished. There has to be someone, who has to teach them a lesson so that they do not repeat such offenses again. If stringent action is taken against one offender the rest will never dare to harm a woman again.

Amnesty International has helped us by clearly putting down procedures to be followed while filing a complaint for sexual violence.


An FIR ( First Information report) against sexual violence can be filed  in any police station, not necessarily the one nearest to the incident.

One can register a complaint either over phone or e-mail. But to complete the FIR registration one must visit a police station .

An FIR can be filed by a friend, witness or a family member too. But they must have the full consent of the survivor and the survivor must be willing to be part of the investigations later.

If a survivor of sexual violence is physically or mentally disabled, a police officer must visit the survivor to register the FIR

Police cannot refuse to file an FIR. If refused the police officer can be punished under law and you can register a complaint with higher authorities.

A woman police officer must be present when you file an FIR against sexual violence.

After registering an FIR, one is entitled to a court-appointed lawyer. But it is good to consult your own lawyer.


Many times, victims or their relatives do not report cases of sexual violence as they do not trust the system. Their is a huge gap between the police and the local crowd. Women feel the atmosphere at the police station might not be friendly for them when they approach with their issue. That is because incidents have happened where no one came forward to support the victim.

Amnesty International decided to bridge this gap by  attempting to bring the police and the local communities closer . They started making women aware through #KnowYourRights campaign so that women know about their rights and also the correct reporting procedures. I am really proud to say that the initiative was started in July 2015 as a pilot with Bengaluru police in which the police encouraged the community to approach them without fear.

This encouragement is much needed in order to drive away the fear and hesitation in the minds of women. This is the only way in which we can regain our trust in the judicial system and report incidents of sexual violence with ease. Sensitive issues like these have not been handled well but once the police and the community try to understand the approach which is required in such cases, the work becomes easier.

Reporting about instances like these will go a great way in helping the police to identify offenders and catch them soon. Otherwise the level of sexual violence will keep increasing and no one will be aware of it. We are in a free country, why live in fear? Why should a woman be bothered about her safety? If women want to feel free and safe it is best to report cases of sexual violence.

For details, do visit their website: https://www.amnesty.org.in/. Courtesy Amnesty International  for information and facts stated here.


“I’m writing this blog post to support Amnesty International’s #KnowYourRights campaign at BlogAdda. You can also contribute to the cause by donating or spreading the word.”

'The Bestseller She Wrote' by Ravi Subramanian- Book Review 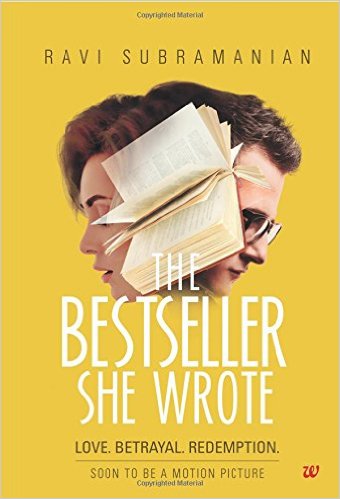 Thanks BlogAdda  for sending me an author signed copy of the book with a personalized note. 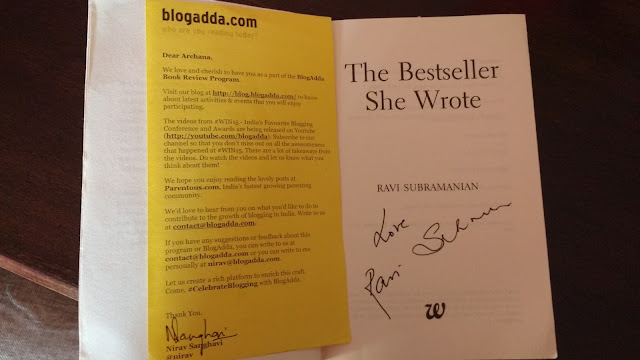 I was too excited to read this book from the day it was launched. I was about to buy it but there was a special feeling when I got an author signed copy of it. To be honest I haven't read any book written by Ravi Subramanian before; but I wanted to read this one, mainly because of the romance and drama in it and I am sucker for romance fiction.

This book held on to me right from the first chapter. The introductory chapter has got the main plot in it from where the actual conflict and drama in the story begins. It is captivating and forces the readers to continue further to know what's going to happen next. As a curious reader one could form various stories after reading the first chapter but what happens in the events that follow are not predictable. The story takes twists and turns with equal dose of romance, suspense and drama. The plot is strong and one can find sub plots within a plot too. The choice of words has been simple which makes the readers flow with the story very well. Although, after the first few chapters I felt it had become a bit dragging but the scenario changed completely once few scenes got done with. Once the story catches pace, there is nothing to stop the readers from reading it till completion at once. I couldn't put the book down until I got to know the outcome of the story. I liked the sudden shift when the story suddenly flips from being a romantic one to a suspense fiction. The story is  realistic and talks about the current day scenario. We get a glimpse of the corporate and publishing world and the struggle faced by upcoming authors. Being someone who has attended workshops held by authors and publishing companies, I could relate to many aspects which have been portrayed. Any reader is bound to get hooked to this book.

The story talks about Aditya, who is a Banker by profession, writer by choice and a bestselling author. Being an IIMB Alumni he is invited for a lecture at IIMB where he first encounters Shreya, an IIM to-be-graduate, who is beautiful, young, sexy, witty and extremely smart. Later, we go on to find out that she is also good at scheming plots in fiction as well as reality, which makes her a good writer and also a relationship spoiler. That one meeting with Shreya is enough to cause havoc in Aditya's happy married life with Maya. Aditya is a bestselling author and much in demand, but falls for Shreya's writing skills, who aspires to become a bestselling author. She eventually persuades Aditya into making her a bestselling author by manipulating him emotionally which results in adultery by choice. Then follows a series of events in which Aditya faces an emotional turmoil when Maya finds out about him and Shreya. Then there is Sanjay, who is Aditya's best friend and has a major role to play in the entire story. The story unfolds its suspense only when Aditya's life is in a little more mess. The arrogant, heavy-headed and ambitious Aditya who gets persuaded by Shreya finally gets a grip on himself and manages to triumph over his emotionally wrecked state. The story ends on a positive note. I liked the play of emotions between the characters. Each character has been etched well and has a significant role in the story. All I can say is that I am just waiting to watch the movie. Now, that I have read about the characters I am imagining as to which actor/actress is going to suit the roles of Aditya, Maya and Shreya.

I am reviewing ‘The Bestseller She Wrote’ by Ravi Subramanian as a part of the biggest Book Review Program for Indian Bloggers. Participate now to get free books!

Posted by Power of Words at 6:38 PM No comments: