The Odd-Even story of every household

The Odd - Even rule doesn't apply only for cars plying in Delhi, it also applies to the distribution of household work. The formula is the same. One is for reducing the amount of pollution due to the increasing number of vehicles, while the another is to make life easier for women while taking care of the household. If I were to travel back in time, lets say, fifteen years before there was always an Odd rule followed in a family when it came to managing the household. It was only left to the women to manage the regular household chores like cleaning, cooking, washing and taking care of the family while men only were concerned about the financial well being of the family. They were the sole bread earners. If there were households where women worked too, they not only had to do the regular work any homemaker does but also had to juggle all this with their professional lives. They had to work as a professional and as well as a homemaker. There was no concept of sharing household work equally between a husband and a wife in many households. But, I am glad that situations are not the same anymore. Progress had happened where men have stepped forward boldly against all odds and have started helping their partner with the daily chores at home.

With the introduction and easy availability of washing machines, like the, completely automatic washing machines, washing clothes became very easy for women. Gone were the days when women had to sit with buckets of clothes in the bathroom and keep scrubbing for hours together. Life became simpler but question here is - Why only women should take the effort to wash clothes? 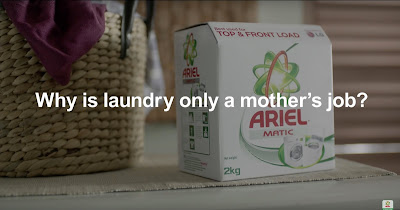 Brands like Ariel, who promise to manufacture detergents not only to brighten our clothes and help in removing rough stains but also help in creating awareness to share the load by their creative commercials which are able to drive in a very crucial message. The surveys they have conducted and the creative Ads with strong message have helped many men in realizing the importance of helping out their partner with the simplest of the household work, like doing the laundry. Ariel always amazes us with their beautiful ideas, just like this one. It gives a clear picture as to how even in modern times women have to hold their fortress at the household as well as the professional front. They have multiple expectations to fulfill and they slog hard to achieve their goals. The father's message to his daughter is conveyed strongly yet subtly.


In the same, way there was an Ad created by Ariel when the #ShareTheLoad campaign began.The surveys showed that men felt it was only a woman's job to do the laundry not matter how busy a woman was with other household work. For that matter even if she was busy working she had to take the responsibility of washing the clothes or locating the clothes for their partner. 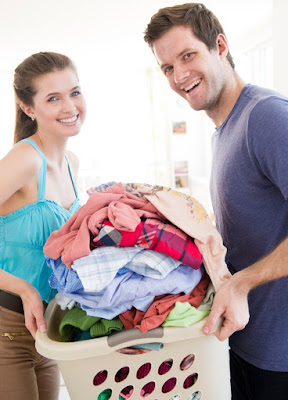 While, Ariel is trying to send a powerful message through it creative Ads which are progressive and are delivering a strong message to everyone, I tried the Ariel Matic for my top load fully automatic Samsung Washing machine. The quantity required is less, and at the same time, the clothes are washed well. I don't need to even scrub the dirty out of shirt collars, cuffs, pockets and sleeves or salwar bottoms. The stains get cleaned easily. Things became simpler when I asked my husband to help out with the washing so that I could dry the clothes once they were done. Initially I used to wait for weekends to wash clothes or would do it when I was back home from work. Slowly, my husband started helping by putting the clothes for wash before leaving for office. If he had time and wasn't getting late for work he would dry them or leave it in a bucket so that when I am back from work I could dry them. Washing clothes became just another routine job for me which never required so much thought process.  Laundry became an even job in house which was shared equally between me and my husband, be it washing clothes, drying them, folding them, giving it for ironing or picking it up from the dry cleaners. We discuss and divide the work for the day so that it becomes easier to manage little things. 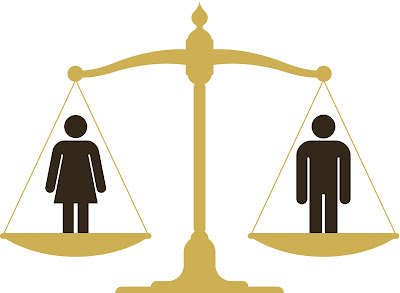 Since we both work we had this problem of grocery shopping. We kept it for weekends so that we both could do it together but at times when the need arose it had to be in the middle of the week. It was always my job initially to make a list and go grocery shopping in days when my husband could not help. We made it even by adjusting our time only for weekends, where we would spend sometime for this. Although there are multiple grocery shopping apps which provide a solution to all these problems but there is a hidden fun in doing things together, as menial as going to a super market and shopping for stuff , except for those days when there are long queues. So, we avoided those stuffy and crowded super markets and instead chose smaller ones which were less crowded. At times, when this weekend plan didn't work out I made a list of the items and gave to my hubby. Whenever he got the time, he would pick up the groceries. Things became simpler after we adopted this lifestyle. In the same way, vegetable shopping also became simpler. We adjusted according each other busy schedule. 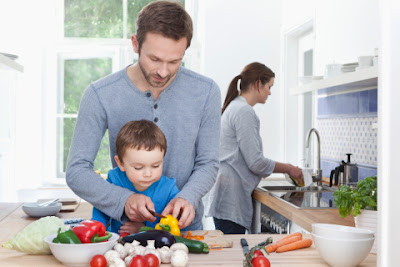 Cleaning the house and arranging everything is still an odd chore in our house as my partner is not too much into cleaning. He does it rarely only when I cajole him to do so but we have tried to even it out by telling each other that while I am doing the cleaning of the house he could help me by cutting some veggies or preparing a light breakfast or brunch on a Sunday morning so that things get done easily. Situations improved slowly and I was no longer feeling stressed out on a weekend. 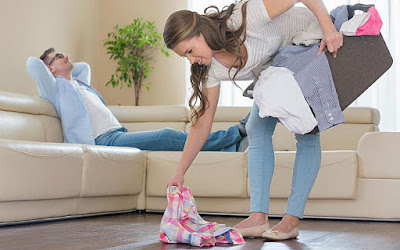 We kept adding things like these to the list and tried to adjust timings in our own way, which would help in managing a household in a better way. At times I do feel that there are so many such household chores that are distributed in an Odd way at home but we manage to identify them by talking about our individual troubles and sort them out.  Solution to these small problems is always simple, we just need to search for means to even out the odd chores. The list is endless as work keeps changing at different stages of life of a couple. All we need is a supporting partner who could sit and talk and also help in finding a solution to these odd troubles.

I am taking part in the #LaundryGoesOddEven Challenge by Ariel India at BlogAdda.'

Posted by Power of Words at 9:57 PM No comments: